Apparently a a picture is worth a thousand words, but what can a Victorian painting tell us about doctors today?

2. Consider the societal expectations of doctors.

3. Reflect on whether doctors can live up to Victorian ideals.

The Victorian era was an exciting period for medicine. Not because of the high probability of making multiple spot diagnoses with late presentation pathology at the end of the bed. Nor the lack of clinical guidelines or effective evidence based treatment for most ailments. The period claims its special place in the history of medicine through the generation of a wealth of practical medical knowledge that it still utilised today, be it in the form of clinical examination or the classical unchanging descriptions of diseases each given an easy to remember eponym.

It is estimated that in 1841 one-third of all ‘doctors’ in England were unqualified in the formal sense. The General Medical Council was formed in 1858 to develop a register of doctors and standards of medical education. The age of the amateur was coming to an end.

It is perhaps a cliche to say that specialist knowledge was used to create a barrier to separate the layperson from the doctor. Jargon, idiosyncratic mannerisms and an understanding of death during a time when dying was being sanitised helped create a cultural ideal of a doctor that has persisted for over a century. Although parts of this image stubbornly persist, the picture is rapidly eroding away as the fences around the profession fall down.

Freely accessible detailed information about the processes of the human body are now available to anyone with a smartphone in their pocket. Global support groups of thousands for rare diseases means patients are more knowledgeable about their own health than most doctors. The idea of the professional doctor has indeed changed and with it we need to reappraise what it really means to be a physician in the modern world.

Returning to the Victorian era, I am now going to ask you to look and reflect on a real picture. Spend at least a few moments looking at the picture below and thinking about what feelings it generates for you as a doctor. If you don’t have any particular feelings about it, that’s fine but instead think about why you don’t have any emotional response to the picture.

The Doctor
Image from https://commons.wikimedia.org/wiki/File:The_Doctor_Luke_Fildes_crop.jpg

‘The Doctor’ is a painting by Luke Fildes that was commissioned by Sir Henry Tate in 1890. It is based on Fildes’ own experience of losing his young son Philip to typhoid fever at home on Christmas day 1877. It shows a Victorian doctor, a general practitioner on a home visit. Fildes’ surviving son (and biographer) later wrote:

The character and bearing of their doctor throughout the time of their anxiety, made a deep impression on my parents. Dr. Murray became a symbol of professional devotion which would day inspire the painting of The Doctor

The Doctor is one of those paintings that reflect not just the era but like other masterpieces still resonates with many physicians today. The more we examine the painting, its history and context, the better we understand ourselves, our role in society and our relationship with patients. At 8 x 5.5 feet in real life, a viewer may feel immersed in it. Let’s look at a few details:

Immediately the light draws the observer to focal point of the painting, the detailed face of the Doctor who is leaning forward observing the ill child. Perhaps he is anxiously waiting for signs of recovery or maybe he is he resigned to the fact that there is nothing further he can do. Sitting down at the level of the child, the power dynamic is equalised; they are both powerless to influence the outcome. He is looking at the patient holistically, not at a particular organ nor performing a specific test. The doctor is a master of his art.

What does your body language during a consultation say about your thoughts? (try video-taping and reviewing a few consultations after gaining patient consent)

The sick child is lying on two mismatched chairs. Hurriedly put together, the situation is one of poverty. In contrast to the well dressed doctor in a suit, the home of the family he is visiting is very humble.

How does visiting a patient at home affect the doctor-patient relationship?

The gravely concerned looking father in the background rests his hand on his wife’s shoulder. He is looking intensely at the doctor. There is no heart monitor, saturation probe or any automatic electronic machine giving a visual or audible characterisation of the vital observations. Instead, the father is hoping to interpret the facial expression of the doctor to provide an insight into the status and prognosis of his child. The doctor is the sophisticated machine of the most fidelitous kind and the father has confidence that the doctor knows exactly what he is doing.

How does technology affect the doctor-patient relationship? 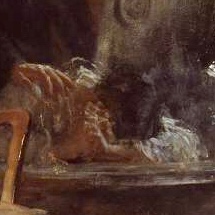 The mother is inconsolable with her head buried in her arms, unable to look with hands clasped in despair or perhaps even prayer. The relationship between medicine and faith has always been fascinating, particularly so at the end of life.

What is the mother praying for?

A partially empty bottle of medicine sits on the table. Perhaps it didn’t work and was stopped before the course was completed. There is a torn up scrap of paper on the floor, a prescription no longer needed or no longer helpful? The medicine bottle is adjacent to an oil lamp, a representation of scientific achievement and rationality, light in the darkness. This next to a cup of tea, a very human gesture of politeness and gratitude thanking the doctor for visiting.

Should doctors be thanked for doing their job?

The morning light shining through the window is contrasted with the light of the lamp. How long as the doctor been there? Has he been attending this one patient throughout the night or is this the last call after a succession of home visits? Fildes himself said that the morning light signifies the recovery of the child:

At the cottage window the dawn begins to steal in – the dawn that is the critical time of all deadly illnesses – and with it the parents again take hope into their hearts, the mother hiding her face to escape giving vent to her emotion, the father laying his hand on the shoulder of his wife in encouragement of the first glimmerings of the joy which is to follow

Now look at the whole picture again. Fildes is reported to have said that he wanted ‘to put on record the status of the doctor of our time’, Moore considers the painting as the enduring image of the Victorian general practitioner that highlights the contemporary shortcomings of the medical profession.

But how real is the scene by Fildes? Many theories exist about the Doctor depicted in the painting. It is likely a composite of several Victorian era physicians:

Gustavus Murray, an obstetrician who knew Fildes and delivered his children.

Thomas Buzzard who didn’t attend medical school, instead becoming a doctor through a general practitioner apprenticeship. His experiences include that of a military medicine and managing the Cholera outbreak of London in 1854. He is perhaps best remembered for being a pioneer of neurology and helping found the National Society for Epilepsy. 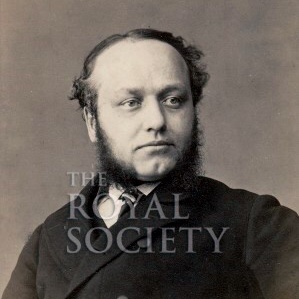 Sir James Clark the Physician-in-Ordinary to Queen Victoria between 1837 and 1860. Queen Victoria is said to have sent for Clark to care for a sick child of a Balmoral servant.

The doctor himself looks very much like Fildes. Indeed, Fildes created a mock cottage interior in his studio and used models to help paint the picture. Moore’s examination of the painting leads us to accept that the painting is not an accurate portrayal of the time; there is no stethoscope, sphygmomanometer nor thermometer, items that would have by that time been adopted by doctors.

Fildes’ painting is still used today by many medical educators to explore the character of a doctor with their students. Is the image a useful fantasy or a misleading distraction? I’ll be exploring this further in the next post, but in the meantime please consider sharing your thoughts or experiences of The Doctor in the comments section below.

The Doctor is a powerful image. It not only impresses upon patients an ideal to which the doctors of today should aspire, but is also useful for real doctors to reflect upon. However, powerful images are necessarily positive.

Art in Science: The Doctor by Luke Fildes: Putting the Patient First
https://www.ncbi.nlm.nih.gov/pmc/articles/PMC4586218/

What Sir Luke Fildes’ 1887 painting The Doctor can teach us about the practice of medicine today
https://www.ncbi.nlm.nih.gov/pmc/articles/PMC2249807/

2 thoughts on “‘The Doctor’ by Fildes. Part 1: Painting and power”

View all posts by Sati Heer-Stavert